On August 31, a morning launch conference for the “Lin-Yang Badminton Affinity Card” was held by the Land Bank of Taiwan. Wang Chi-Lin and Lee yang, the duo featured on the card who are also members of Land Bank’s badminton team were both invited to take part in the launch as well. The Lank Bank chose to launch the eagerly anticipated affinity card a full month after their Olympic glory to not only highlight the symbolic value of the card but also remind everyone in Taiwan of that inspirational moment a month ago.

During her speech, Land Bank Chairperson Chuan-chuan Hsieh said that a lot of effort took place behind the scenes including obtaining approvals from the Olympic Committee and VISA to make the Lin-Yang Badminton Affinity Card a reality. She thanked VISA in particular for making it possible for the new credit card  to be unveiled a month after the duo’s crowning moment.

At the press conference, Land Bank Chairperson Chuan-chuan Hsieh and President Ying-Ming He joined Wang Chi-lin and Lee yang for the card unveiling ceremony. The new card issued by Land Bank comes in two versions. Both feature the “Hawkeye line-call” from the match point of the final game as their main motif on the front of the game. One version shows Lin and Yang swinging their racquet, while the other shows them raising their arms in triumph. Members of the public can choose their preferred design. Stand out features of the credit card include its representation of an Olympic gold medal win and the Tokyo Olympics logo. The card also embodies and communicates to every card-holder the Lin-Yang spirit of never giving up. Land Bank will also donate 0.25% from all transactions made with the card to the domestic development of badminton so that it can become a national sport. The card is made from eco-friendly materials as well in support of the global trend towards energy conservation and carbon reduction. In addition to encouraging the general public to opt for electronic statements, online applications will be the favored method of application.

Land Bank has launched a range of promotional offers to celebrate the duo’s Olympic win such as mobile payments by digital banking customers, champion lucky spin and value/dollar-cost-averaging fund investments; to support the upcoming “5-times stimulus coupon” being issued by the Executive Yuan, Land Bank indicated that new customers that apply for the affinity card and sign onto a plan will go into the draw to meet Lin-Yang in person (share a meal or play badminton together). Details of the promotion can be found on the Land Bank website. 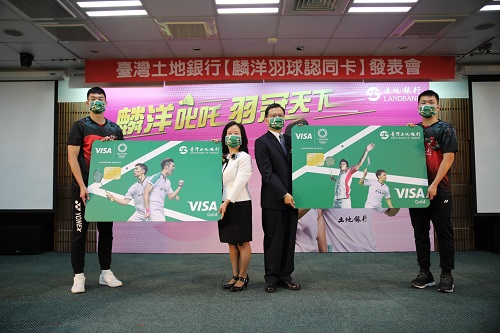 Chairperson Hsieh, President Ho and Wang Chi-lin (first on the left) and Lee yang (first on the right) unveiled the card together.
︿