The previous headquarters of the Bank is located at Taipei City's Xiangyang Road. In 2005, the Bank cooperated with National Taiwan Museum, and the museum is in charge of restoring the monuments, and subsequent operation and management of the building. Officially opened as "Land Bank Exhibition Hall" in 2010, the museum's exhibition themes include "History of Land Bank of Taiwan" and "Paleontology Exhibition－Epics of life, the evolution", which is about paleontology and evolution. It is ideal place for learning about the origin of life on earth, and Taiwan's endemic species, and it is popular with both parents and children.

To give the children a fantasy tour of the museum, the Bank cooperated with National Taiwan Museum in organizing a two-day  "Overnight in Jurassic Park" charity event, inviting about 30 children from Ministry of the Interior Northern Region Children’s Home.

On August 16, the day of the event, the children visited the museum, observed the fossils of trilobites, mesozoic dinosaurs and cenozoic mammals at a close distance, dressed as different kinds of animals, and had a fun time with personnel from the headquarters. They were treated to an exciting magic show and stayed the night at the "Land Bank Exhibition Hall" with the dinosaurs. On August 17, the children had a knowledgeable trip through a stroll with the guides in the city of Taipei, where they listened to the history and stories of the city, and visited the only Government -owned camphor factory in Taiwan during the Japanese colonial period. The Bank hopes to give the children a memorable summer vacation through this exciting and interesting activity. Most importantly, it hopes that these children are able to remember the happy moments, and experience the beauty of the world.

The Bank is a wholly state-owned bank under the Ministry of Finance. Besides being dedicated in its core financial business, it also concerns for the less privileged and contributes to the community. Through this interesting educational activity, it hopes to  make the less privileged children feel the warmth of the society, as well as encourage the public to participate in more charitable activities. 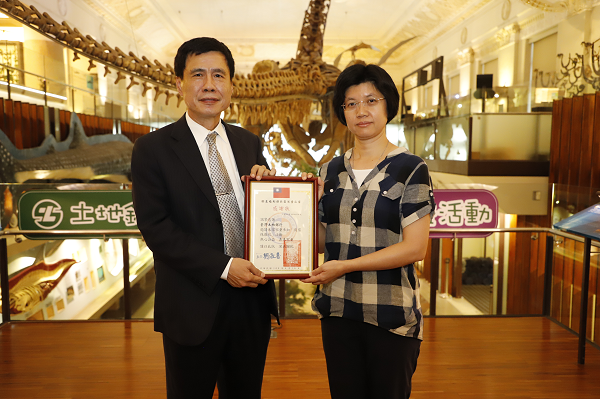 Photo of Chairperson Hwang was accepting a certificate of appreciation from Director Liu Shu-Xi of Ministry of the Interior Northern Region Children’s Home.
︿