The Land Bank of Taiwan held a ceremony to recognize the "Champion of the World for LINYANG."

On the morning of August 19, the Bank held a ceremony to recognize the winners of the Gold Medal in Badminton Men's Doubles at the 2020 Summer Olympics, Wang Chi-Lin and Lee Yang, who were also the members of the Bank's Badminton Team and their coaches at the Bank's Head Office. Due to the epidemic situation, the maximum number of participants for the event was 50, so we could not let the other guests have a chance to see these two heroes in person, but we still tried our best to present a magnificent and warm atmosphere in the ceremony. We sincerely hope that LINYANG can feel the warm welcome and honor from the whole bank to both of them.
In the recognition ceremony, all the senior officers of the Bank were present; in addition, we announced the promotion of Wang Chi-Lin and Lee Yang for their achievements. The Chairman of the Board, Chuan-Chuan Hsieh, said in her speech that the Bank is a 100% owned by the government and in order to fulfill its corporate responsibility, the Bank has been continuously training badminton players for 45 years and organizing badminton camps and other promotional activities for years. Thanks to the hard work and dedication from the coaches and players, the team has been able to achieve excellent results and win the gold medal for Taiwan at the 2020 Summer Olympic. As the Chairman of the Board, she is so  proud and honored! During the ceremony, the Chairman of the Board Chuan-Chuan Hsieh awarded $500,000 cash prize each to LIN and YANG. The President of the Bank, Ying-Ming Ho presented $300,000 cash prize to the team coach Hong-Lin Chen and $100,000 cash prize to the head coach Song-Yuan Lee.
At the end of the ceremony, the young players of the badminton team met with Lin and Yang and they presented flowers to LINYANG, who also gave back a badminton racket to them. Their sense of humor made  the event heartwarming and joyful. This special moment is a symbol of inheritance, we hope that they can pass on their determination of “working together and making a name for themselves" to our team, so that our badminton team can continue to win for the country again.
In order to celebrate the victory of the badminton players, Wang Chi-Lin and Lee Yang, the Bank will launch a series of special promotions for customers, such as mobile payment for digital deposit customers, championship spinning and fund application and so on. We have prepared a number of prizes, such as the autographed racket of Wang Chi-Lin and Lee Yang, to be drawn by customers who will participate in these activities; we hope that our customers can share the joy and victory with us. 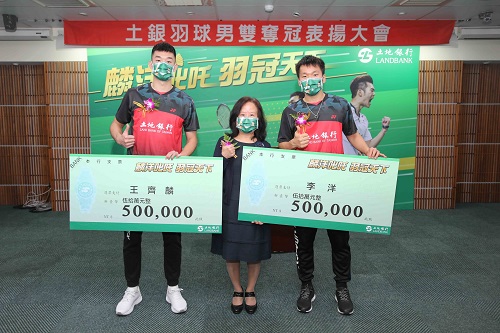